Christmas is considered to be the most wonderful time of the year; however, every culture, country, city, and community celebrates Christmas in their own unique wonderful way. Spain is a popular location to spend the holidays, whether in the cold snow in Northern Spain or in Southern Spain for those nice warm beaches. Wherever you decide to spend the holidays, Spain is a great destination to visit new places and learn about new cultures and languages. Come visit Spain for the holidays and learn Spanish with MyHOSTpitality.

Christmas is one of the greatest holidays, if not the greatest holiday of the world. Everyone is filled with love, hope, and wonder. Even though it has different meanings for everyone, many traditions are celebrated the same across the world. Just like in the US, Spain cities are filled with lights and Christmas decorations that show the beauty of the holiday season. Some families embrace the idea of Santa Claus, and give gifts on Christmas Day; however, most families give out presents during Three Kings Day. Christmas is traditional known for being the day the Baby Jesus was born, and because Spain is a heavily influenced catholic community many families attend Mass during the holiday season, in order to recognize the birth of baby Jesus. Celebrating the holiday season in Spain is a great way to learn Spanish, and embrace Spanish culture. When you do a language exchange with MyHOSTpitality, not only will you be able to experience how other cultures celebrate the holidays, but you will also be able to teach others how you celebrate Christmas.

Depending where you spend Christmas in the States will determine what kind of actives, food, parties you participate in; it is the same in Spain. However here are some traditional foods that you can expect to be present at many Christmas dinner tables. Because Spain is geographically near the sea and ocean many families enjoy seafood during the holidays; the most common being langostinos or King Prawns or Jumbo Shrimp. Also, ham is another traditional food that families prepare during the holiday seasons. Many families also go out to eat a nice Christmas dinner with the whole family and spend time together enjoying one another’s company. Don’t forget that Spaniards typically starting eating dinner until 9:00 pm. As for desserts, they might not have traditional desserts that we experience in the US, but you definitely won’t be disappointed in trying these sweet treats. The most popular of these sweets is called Turrón or Nougat as we know it to be. It is a candy that is made with honey, sugar, egg whites, and nuts (usually almonds). Once you have a taste you won’t be able to stop stuffing them in your face. No matter what you eat during the holidays these traditional Spanish foods will sure make your experience abroad will be one that you’ll never forget. You can learn all about the traditional holiday foods while you learn Spanish with your host family; they might even be willing to help recreate some traditional Christmas foods you enjoy during this wonderful time of the year.

Spain celebrates many holidays that culturally identify with religious holidays of the catholic church, due to the church and state of Spain only being separated for about 40 years to this day. Even if the Spaniards of today don’t identify with the catholic religion, many holidays and traditions have been integrated into Spanish culture. Which is one reason why the Spanish celebrate Día de los Reyes or Three Kings Day.  Fun fact: the Spanish people have more elaborate celebrations for Three Kings Day than on Christmas or Christmas Eve, and most children ask the Kings for gifts rather than Santa Claus or Papa Noel in Spanish. 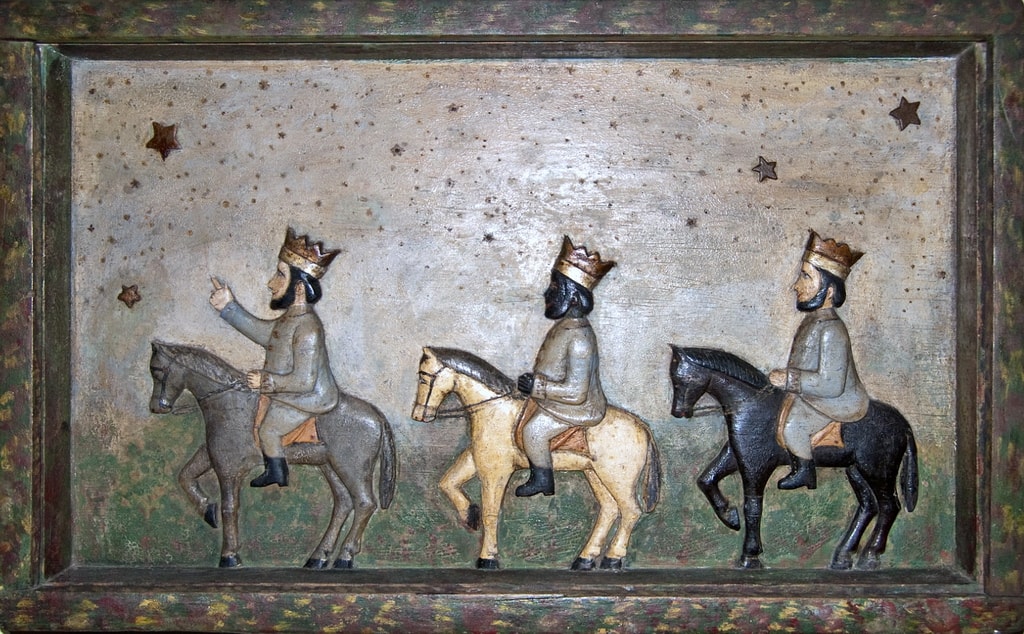 Festivities officially start the evening before Epiphany, on the night of January 5, when the Cabalgata de los Reyes Magos (Three Kings’ Parade) takes place in every town and city, with hundreds of people crowding the main roads of the urban settlements in order to get a glimpse of the reenactment of the arrival of the Three Kings into town. Just like Christmas how children wait patiently for Santa to come shuffling down their chimney, the Three Kings, are put to the test on January 6, the day of the Epiphany. Children, families, and entire cities throughout the country celebrate this major Spanish tradition. With festive lights livening up the streets, Nativity scenes set up in various locations, and holiday tunes setting the holiday atmosphere. The kings ride upon horses or elaborate floats and throw goodies down to the children in the streets. This is also traditionally the big opportunity for children to ask the Kings for presents. Children leave out their shoes in a spot where the Kings are sure to see them. The religious monarchs, just like Santa Claus, certainly love their sweets, so Spanish children often set out goodies to entice the Kings as well as hay to feed their camels. When morning arrives, children delightedly discover that the Kings nibbled the sweets, the camels ate the hay, and by their shoes there are wrapped presents just waiting to be torn into. The magical night comes to a close with another Spanish holiday tradition: a typical breakfast of Roscón de Reyes, a ring-shaped cake decorated with fruits symbolizing the precious gems that adorned the royal trio’s lavish clothing.

Spain is infamously known for eating grapes as a New Year celebration. The tradition is that every time the bells ring once the clock strikes twelve, to signify the New Year, you must eat a grape that will bring good luck in the New Year. There are 12 grapes for the 12 months of the year. Many choose to remove the seeds or even peel the skin from each grape in order to have better chances of finishing them. Just as Americans watch the ball drop in Times Square, Spaniards watch the clock in Madrid’s central plaza the Puerta del Sol. Being surround by people who love the holiday seasons, is a great way to learn Spanish and practice your communication skills.

For more information do not hesitate to contact us through our email info@myhostpitality.com, we will be happy to help you.

Tags:
Anterior
Reasons You Should do a Language Immersion Program in Spain
Siguiente
The two great carnivals in Spain and their vocabulary